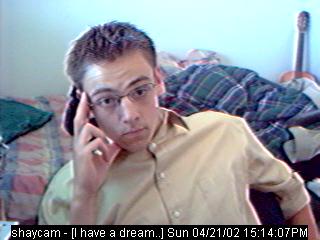 I was feeling a little studly yesterday. So that’s the reason for the picture. I think it’s funny that I called it “gqshay.jpg” Some times I think I am sooo funny. But I’m not, I know.

But whatever. I just got back from play practice about an hour and a half ago. Spent a little time in my friend Tim’s car just talking in the driveway. We do that sometimes. It’s a good time. Tonight we just were talking about school being over soon and how cool it would be if I moved down to where he’s going to be and stuff and I don’t know, just good stuff. Love hanging out with my guy friends.

I really don’t have anything inspiring to say this evening. It’s hard for me to think of things these days. Everything is in slow-motion. But I do have a little story to tell. So yesterday I go to call to RSVP for this dance that I am going to. And I end up talking to a friend of mine that I have known for a long time. But we just like started chatting and ended up chatting for a long time on the phone. Just laughing and stuff. It was really cool. Cause we could just be friends, there aren’t any ties there, you know? If you can (here comes my words of encouragement), but I think whether you are a guy or a girl you should find one or two friends of the opposite sex to just sit and talk with. It’s awesome, but not someone who would make things weird for you or whatever. I don’t know how much of this is making sense, but it’s a real thing. It’s good to have friends of the other sex that are just friends, and nothing else. I don’t know if I explained that well enough. But whatever.. I think I am going to go read my Bible now and do my devotions.