We’re back! Not just from our month long hiatus from the blog, but from our very first European vacation.

Quite honestly, I sighed a sigh of relief as we returned home last night and finally turned the car ignition off after a thirteen hour road trip home. And now we’re one of those families–you know, a family with one of those vacation stories. Everyone has one. What began with wonderful planning (what did people do before the Internet?!), check-lists (we still forgot the coffee), and perfectly packing the car (yeah… like a man), quickly turned in to a drama worthy of a book deal and a movie (still waiting to see if Ashton Kutcher and Reese Witherspoon sign on for the lead roles). Bethany expressed it well: “we need a vacation from our vacation.” So grab your popcorn and find a seat (I like about halfway up, in the middle) because here’s the tale in it’s entirety.

A Beautiful Drive and a Sick Kid

We live in northeast Czech Republic, literally on the border with Poland and not far from neighboring Slovakia (in the upper right corner of Czech). This actually puts us within driving distance of some of those most beautiful cities in the world. Vienna, Prague, Krakow, Budapest, and Berlin are all about 3-5 hours away. If you want to see the beach you gotta work a little harder for it, but you can head south to the countries of Slovenia or Croatia for warm water and hot sun (or, for you romantics, you can get to Venice, Italy in 9 hours flat from our house). We decided we wanted to head south mostly because we had been invited to attend a wedding in Slovenia and since we would already be making the 7 hour drive we thought it would be fun to vacation there. Even Rick Steves (your favorite American travel guy) says, “Slovenia is the least visited and most underrated of Europe’s alpine countries.” So last week on Friday we left at precisely 7:57am and hit the open road for an entire week away. Alright! 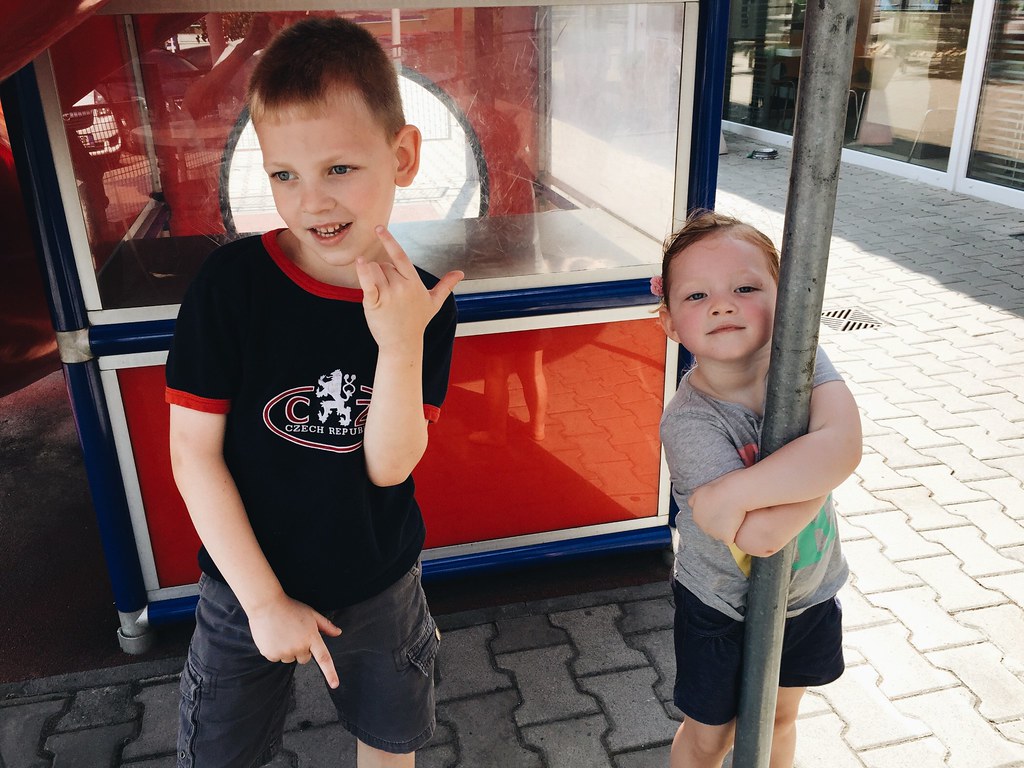 The drive was beautiful. We saw all of Czech Republic, all of Austria, and then well into stunning Slovenia. We had to make planned stops every 2-3 hours to feed Karis, but the kids enjoyed the regular potty breaks and playing at the McDonald’s play places (shown above). The trip was mostly uneventful until about 30 minutes before we crossed the Austria/Slovenia border. Almost out of nowhere Titus said quietly from the back seat, “I am going to throw up.” We were humming along the highway at the speed limit but I took him seriously and pulled to the emergency lane and stopped the car. Bethany jumped out on his side of the car and as she opened his door Titus lost his lunch inside of our van. Had I been a little quicker maybe could have gotten him out in time, but the damage was done.

Bethany proceeded to get him out while a steady stream of traffic was going by us (thankfully, we stopped at a turning part of the highway where traffic was going slower than the average 80mph). I then began unpacking the car on the highway to get to that one bag which had his clothes in it. The kids’ bikes, our backpacks, Pak-N-Play, and my camera bag all had to come out on the side of the road so I could open a suitcase and get Titus a change of clothes. Titus threw up four more times in the next two hours, once more in the car and on the side of the road. We ended up arriving about two hours late to the apartment we rented in Slovenia, but the lady was very kind and gracious with our situation (we rented it through airbnb.com). The place we stayed was really nice and we began running the washing machine as soon as we arrived. Titus didn’t seem to have any more issues and was feeling fine which, of course, we were thankful for. Everyone got a good night’s rest that first night and were excited about what the next day would hold.

A Wedding at a Castle

Without getting into the crazy details, friends from the States have a daughter who married a guy from Slovenia. They held two ceremonies, one in the States a few weeks ago, and one last week in Slovenia which we had the privilege of attending. The morning of the wedding (our second day of vacation) it was raining pretty hard. We had a little twenty minute drive from where we were staying to get to the the family’s house where all the festivities of the wedding would begin. On our drive we went right through a pretty wild storm. By the time we got to the house the storm had cleared and sun was shining!

This wedding was our first since moving to Europe and it was a ton of fun. There are so many cultural things that we enjoyed. For instance, everyone attending the wedding met at the family’s house for a mini pre-reception thing. The family provided snacks and drinks and everyone gathered in the front yard and driveway while a young man played traditional Slovenian songs on his accordion. Some people danced and others just mingled while the bride and groom walked around and greeted them. Then we heard, “OK, we’re leaving!” and they handed us bags of candy. The girl who gave us our bag said, “We are going to caravan to the wedding and while we drive, if you see kids on the side of the road, throw this candy to them!” For our kids, that was a highlight. We saw a lot of kids on the side of the road and our kids would throw the candy and they would pick it up and wave. The long caravan of cars snaked their way through the little town en route to a Slovene castle (honking the entire way) where the wedding would be held. Here’s a short video I got of the front yard before we all drove away together.

As you may have guessed, the wedding location (a literal castle!) was incredible. Apparently this particular castle is one of the few left in Slovenia that wasn’t destroyed. I don’t know all the history, but what I heard from someone was that it was used as a vacation home for royalty. Obviously, any wedding with three little kids in tow is not easy and this one was no exception. We did OK, but it was hot, a little muggy, and our kids were tired by the time we arrived, yet we still had a fun time. The kids loved the castle grounds and we even did a little exploring. We had fun visiting with our friends and of course seeing their daughter get married. Unfortunately we couldn’t make it to the reception (which was held at another location) because we really didn’t think our kids were going to make it. Slovenian receptions will traditionally last until 3 or 4 in the morning so we ended up leaving after the post-ceremony mini reception. Here’s a few photos from the wedding. 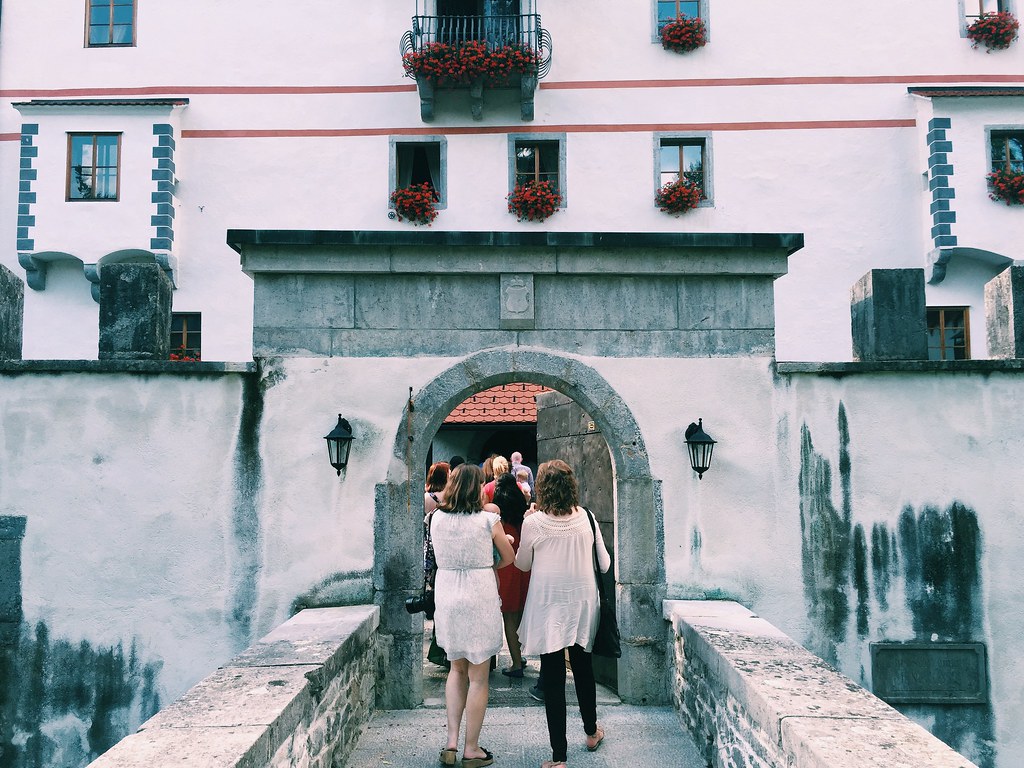 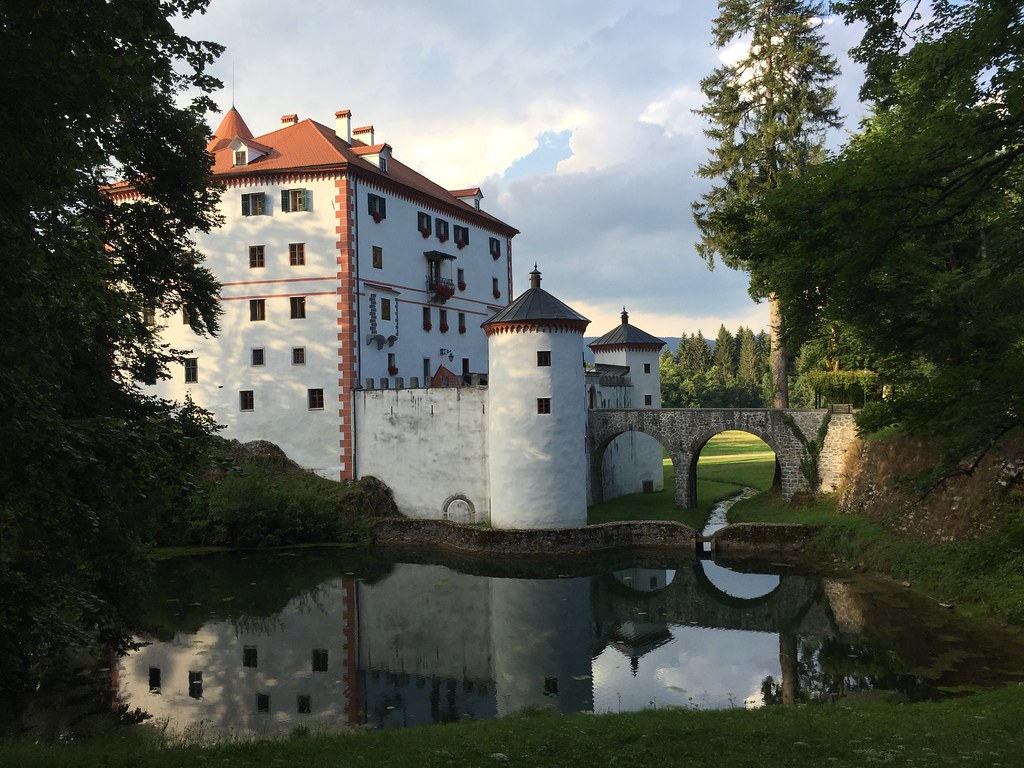 And thanks to Larry for letting us use this last photo of all us! 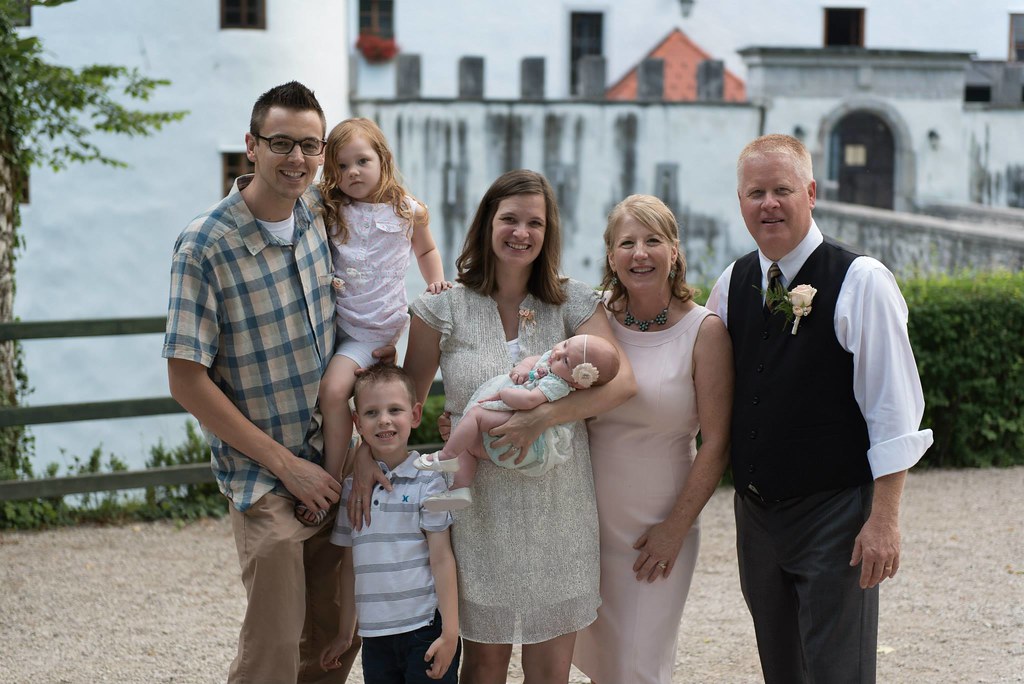 I will admit that I’m the worst at overusing the word “awesome.” Culturally that’s true as well. As the popular song from the Lego Movie says, “Everything is awesome!” Well, if everything is awesome then really nothing is awesome…except Lake Bled, Slovenia. It is truly awesome. Lake Bled was a forty minute drive from our apartment and we went there the day after the wedding (if you’re keeping score, this is day 3). We actually saw some other Josiah Venture missionaries at the wedding and they helped us put some plans together for Lake Bled. They were kind enough to contact friends that work at the lake and we were able to do a few things there that we wouldn’t have done otherwise. 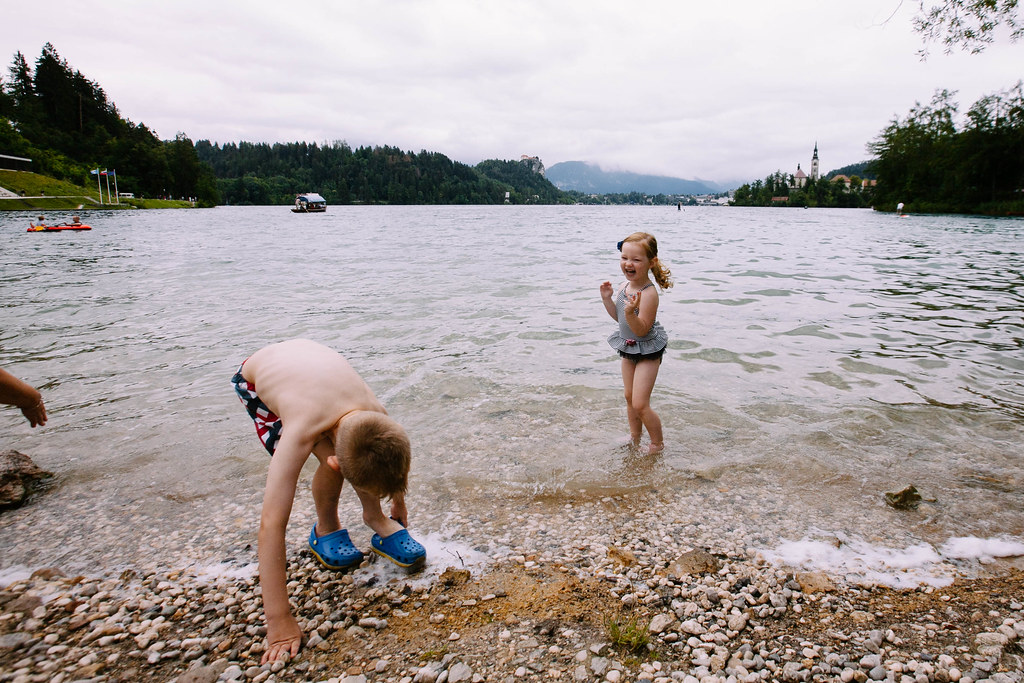 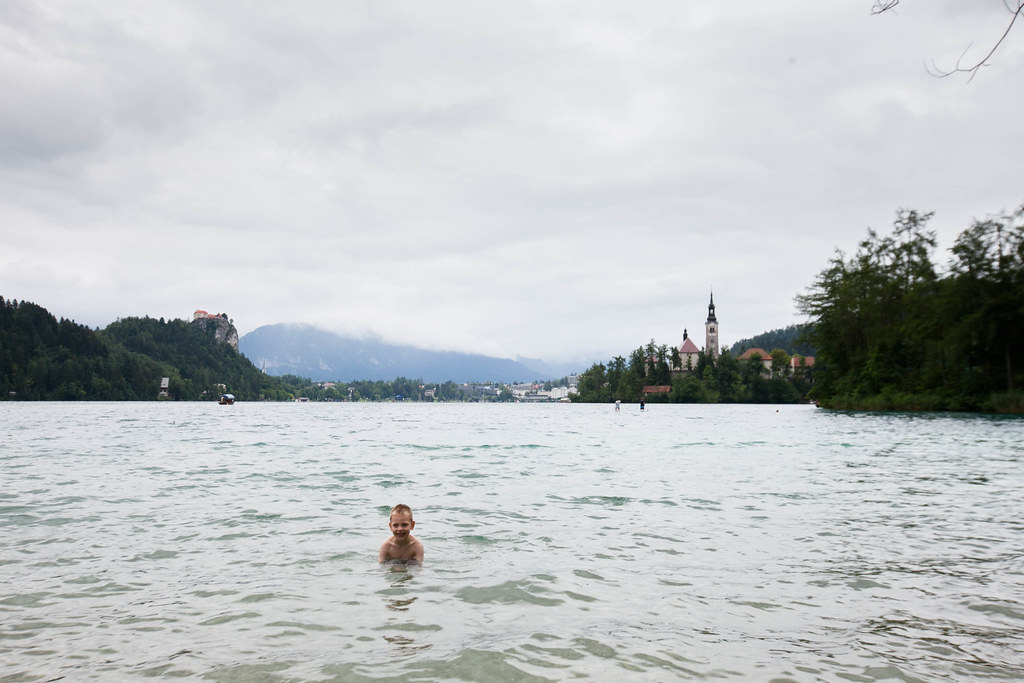 We found a parking area on the north end of the lake and ate our home made lunch from the car and watched while people and cars poured in for some fun of their own. So many people from so many different countries were spending the day at the lake. After lunch we headed over to the shore, set up our stuff, and got the kids ready for some water time. The lake was not only amazingly clear, it felt warmer than the outside air. We were worried it was going to rain, but the rain never came. The kids went for a swim while Bethany, Karis, and I played on shore. The wind was a little chilly but since the kids were having so much fun we didn’t mind. 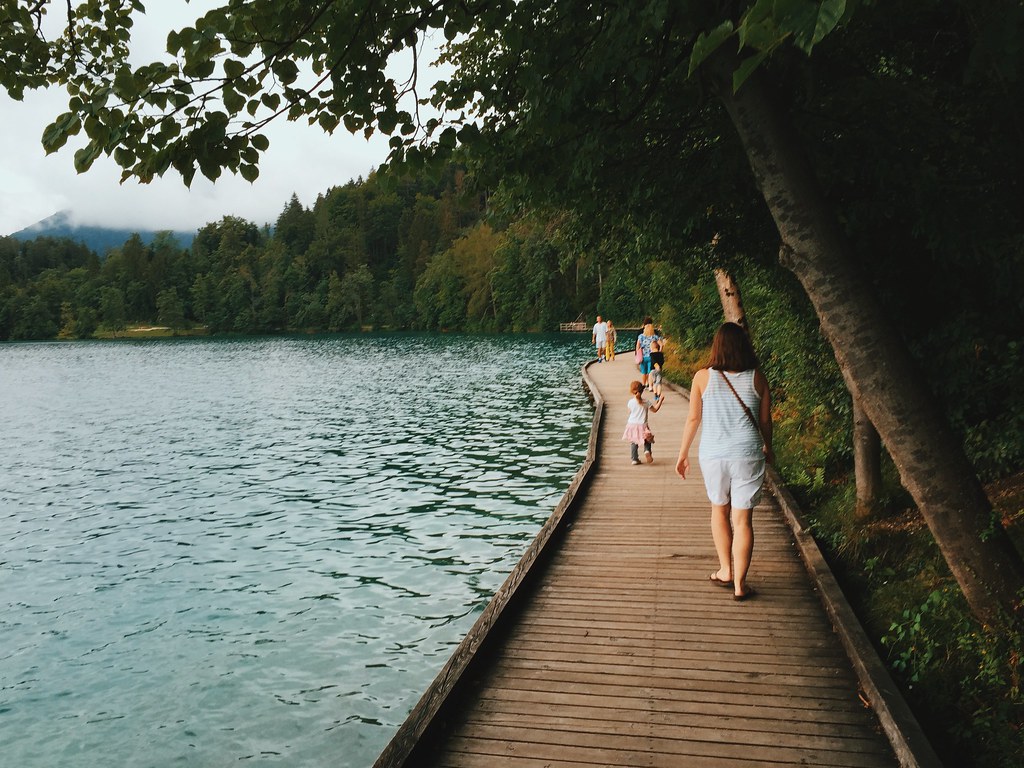 After the kids were tired of the water we decided to walk around the lake to where the boats were launching. Our friends told us to a find a young man who would be willing to save us some serious cash and take us to the island in the middle of the lake. The walk proved to be a highlight. We thought it would be hard to get all of us around the lake but the walk is beautiful and right along the edge of the water. In the above photo you can see us walking on the path that they built right on top of the water. It was, you guessed it, awesome. 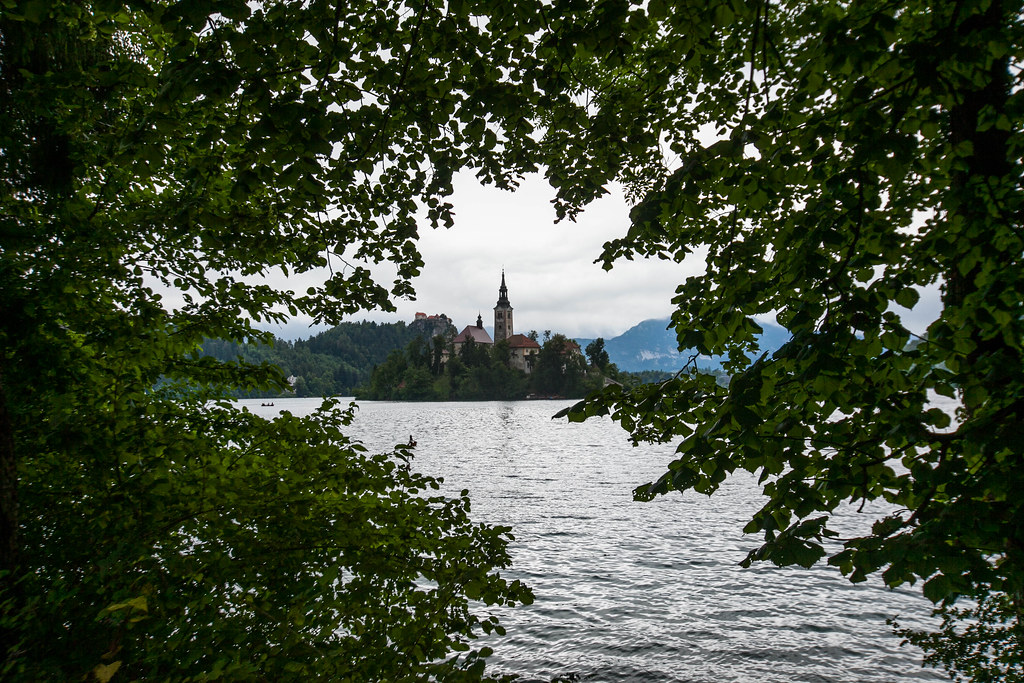 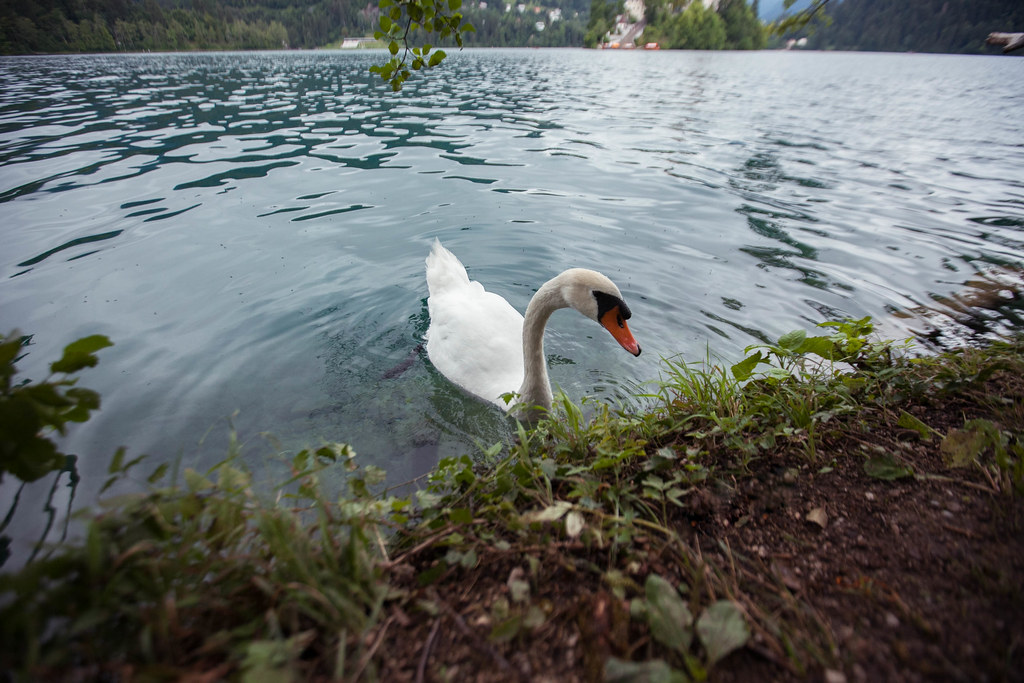 In God’s sovereignty, just as we were approaching the boat area, the young man we were trying to find was rowing a group of people back from the island in the middle of the lake. He said it would be no problem to take us out to the island at no charge! It’s actually kind of pricey, so this was really gracious. We joined another group and headed towards the island (it was our kids’ very first boat trip). As we boarding, Avery freaked and ran away from the boat because she was scared. I got off and grabbed her while the boat waited for us to board. Finally, she settled down and started enjoying it as we were slowly oared away. 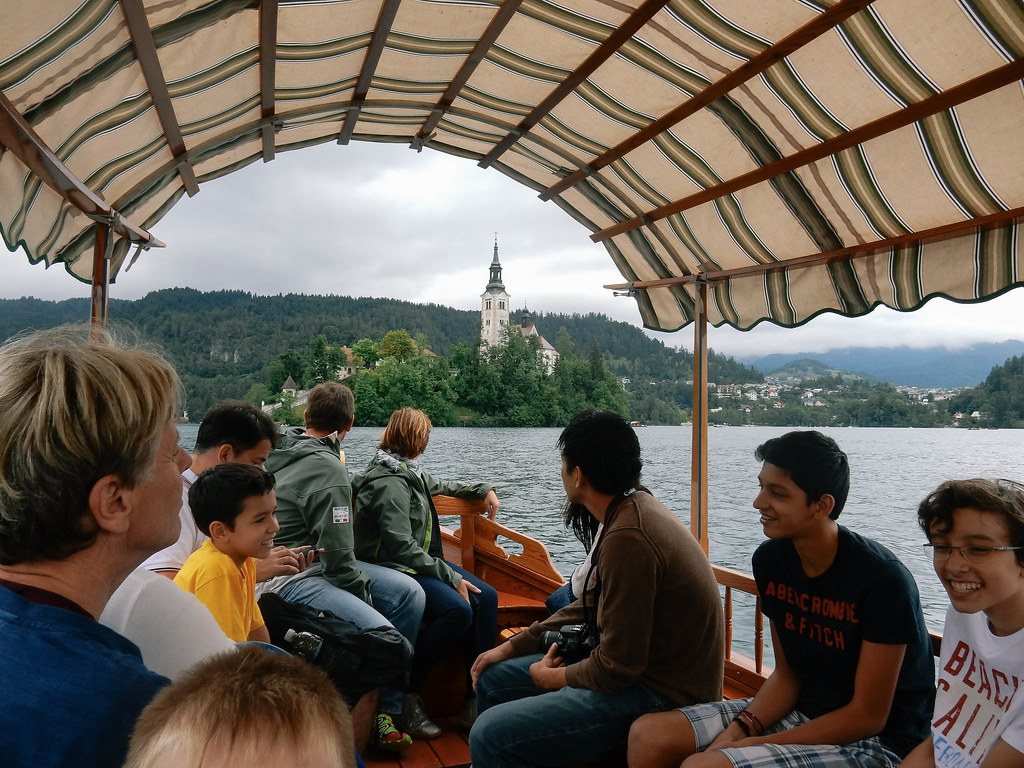 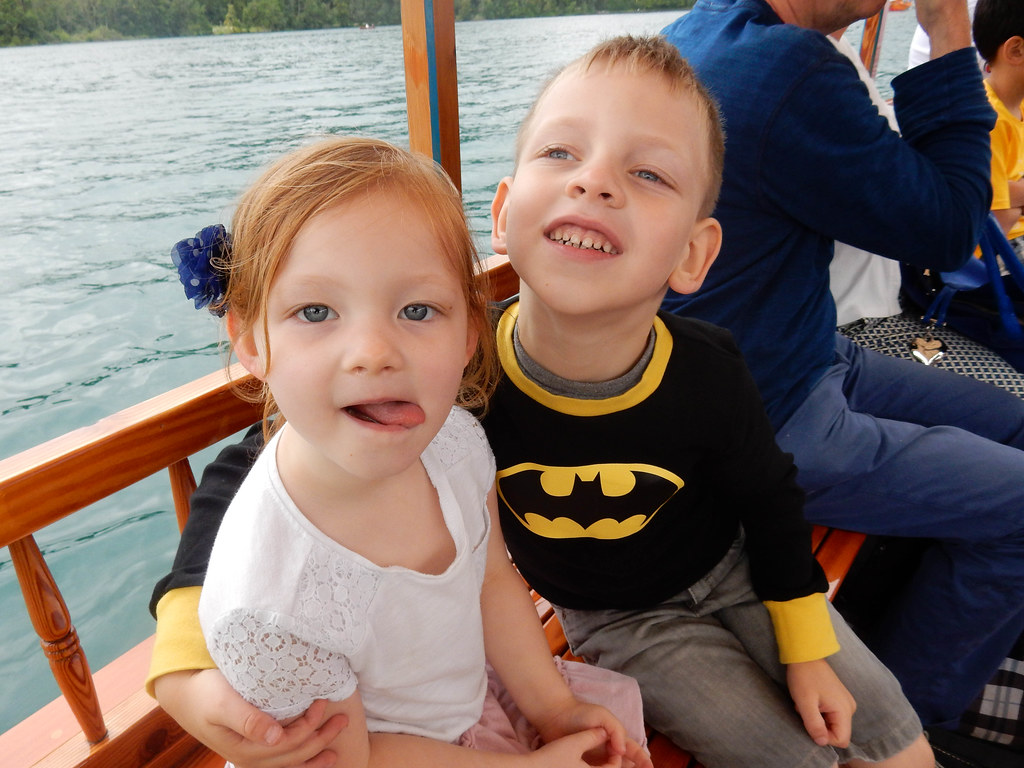 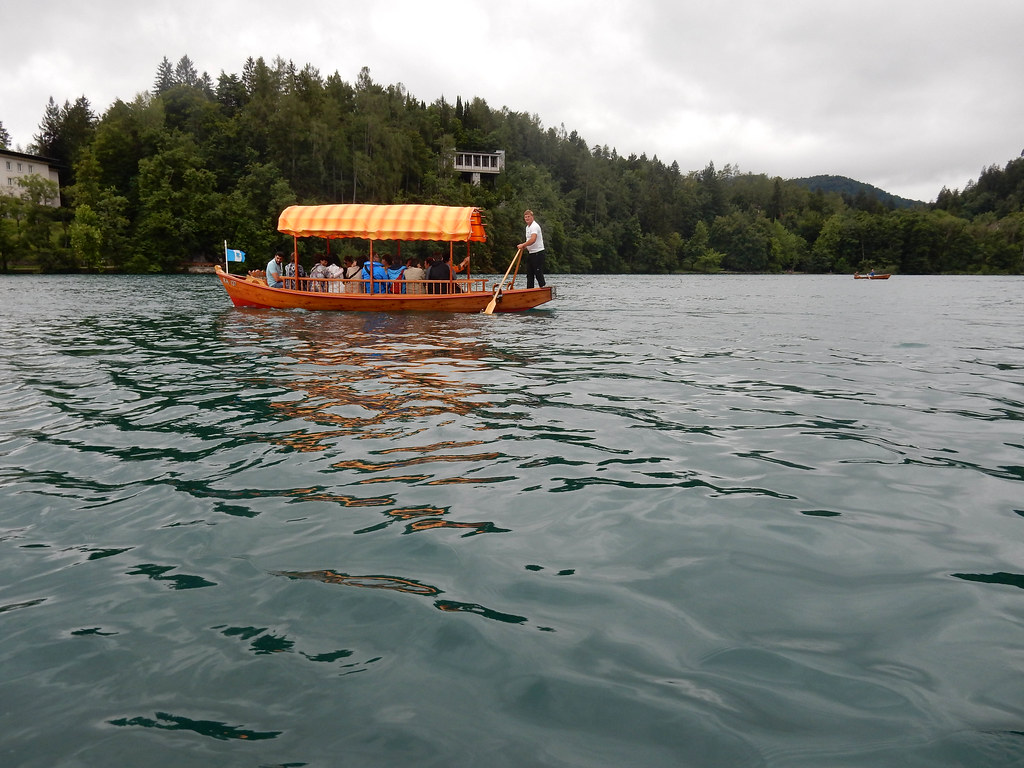 The island has a little coffee and cake shop, ice cream shop, and even a church. You can literally walk around the entire edge of the island in four minutes. We stayed out there for an hour and Bethany fed Karis in the coffee shop. I bought ice cream for the kids and me and we just enjoyed staring out at the water. Here’s a few photos from out on the island. 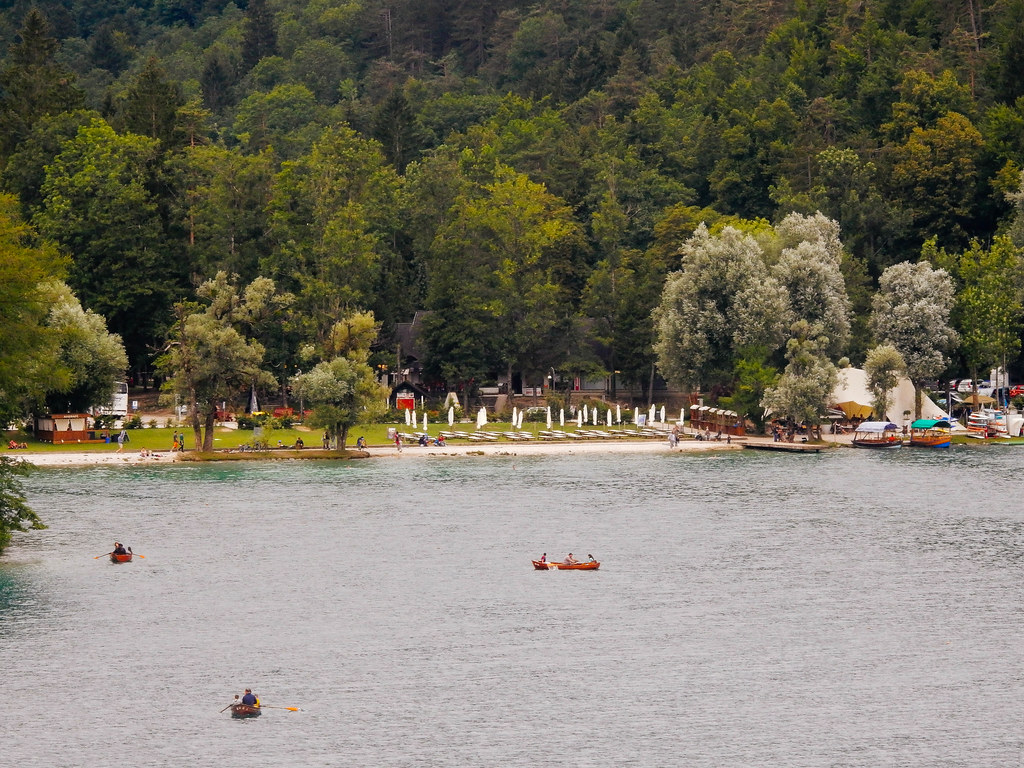 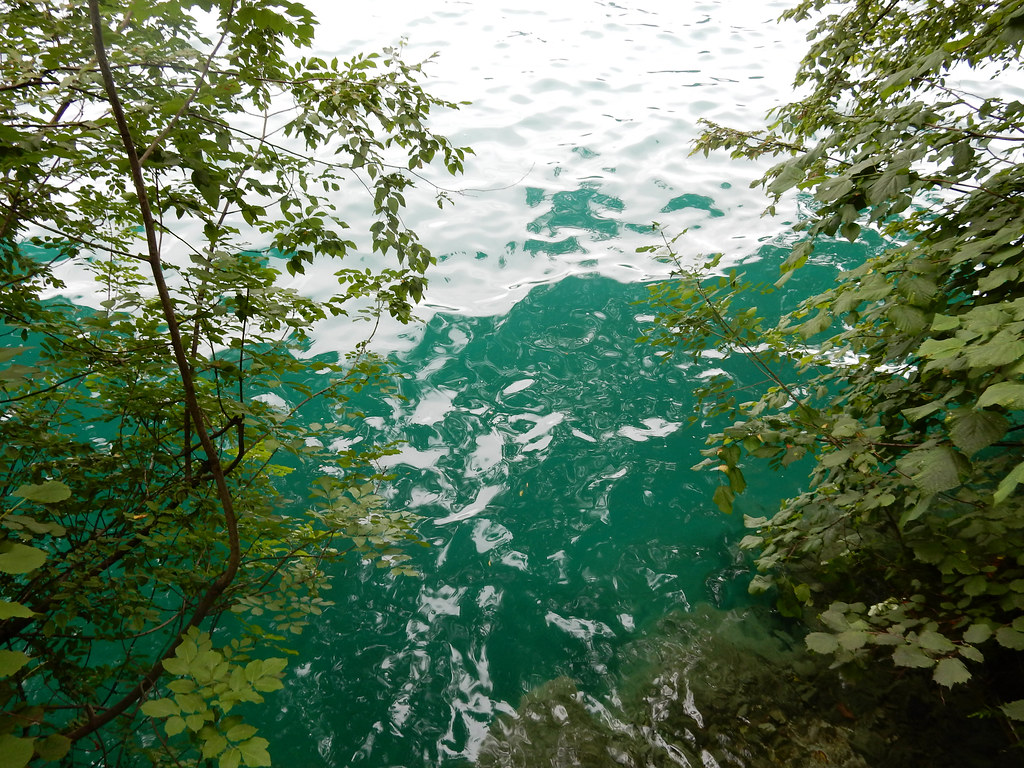 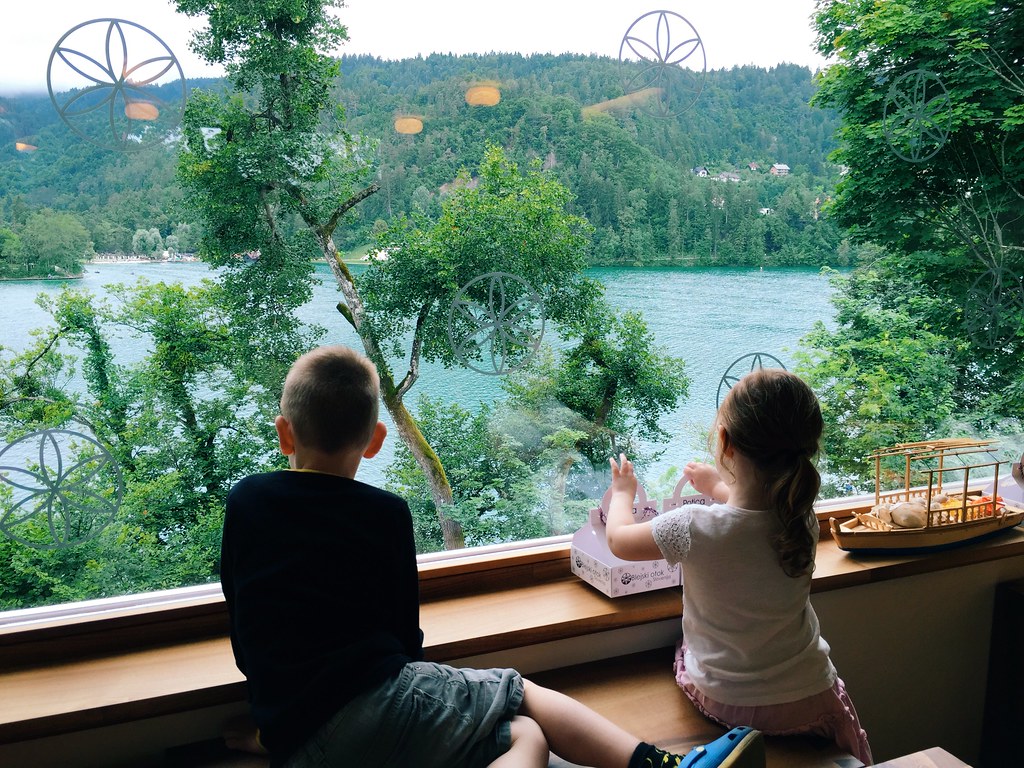 We spent about an hour on the island before being rowed safely back to land (this time without any protest from Avery as we got on the boat). It was getting late in the day and we were hungry so we decided it was time to leave. Walking back to the car we talked about how much fun it was on the island and the lake and we were still enamored by the surroundings.  Shortly after departing our kids fell asleep in the car and we stopped off at a local burger stand for some dinner before heading back to the apartment for one more night. Our plans for the rest of our vacation included 4 days on the coast of Slovenia. All of us have been wanting to see some kind of coast or beach so that seemed like a safe bet. However, the Lord had other plans and for that part of the story you’re going to have wait for part 2!