We had lunch this afternoon at home and Titus was the first one done. The kids know they need to ask to be excused from the table to take their plates and silverware to the kitchen sink. As Titus got down from his chair, he said, “I gotta go work on the blog.” I began laughing hysterically, but Bethany missed what he said the first time, so Titus repeated himself and then we were both cracking up. It was in that moment that I realized just how many times he has heard me say that since we moved here. Actually, it’s possible he’s heard that a few hundred times. 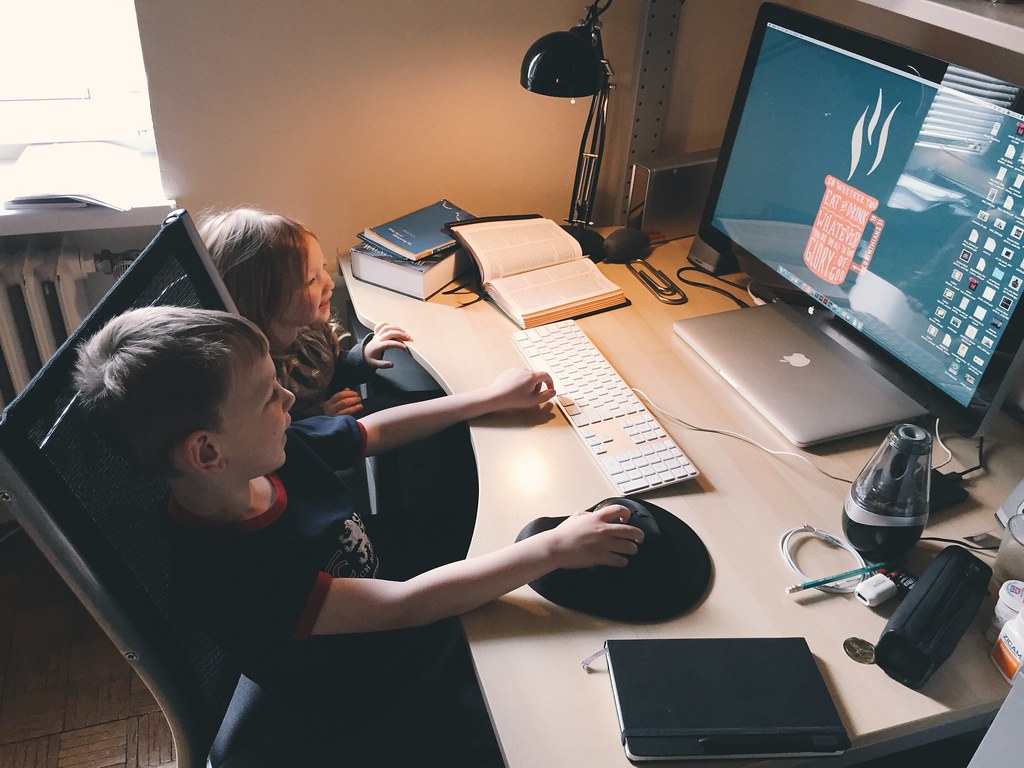 Today marks our three hundredth day in Czech which means there have been as many blogs. Although I don’t usually start working on the blog until we’ve put them to bed, not all nights are the same so no doubt the kids have heard me say, “I gotta go work on the blog” more than once. It has become such a part of our lives that even this morning I said to Bethany, “Wait?! Did I write a blog last night?!” I genuinely couldn’t remember. It’s like when you can’t remember if you brushed your teeth or put deodorant on (maybe that only happens to me?). It is just part of the routine and some things get some routine you have a hard to remembering if you forgot to do it! We ended up letting Titus go over to my computer and “work on the blog,” so I got this photo of him in front of the computer this afternoon (shown above). This is spot where the blog happens every single day. It’s a joy for the whole family!

We’re preparing for Titus’ birthday this weekend and we needed to go to the store to get a few supplies and try to find out if they have cupcakes. Instead of shopping in Czech, we actually went to Poland because they have a big store there with a ton of variety, and we also knew they had party supplies. Titus has been really in to Hot Wheels for some reason, so we tried to find some themed items there. They did in fact have Hot Wheels plates and even some of those noise makers that you blow air in to so we picked those up. Unfortunately they didn’t have cupcakes, but we’re going to try to figure out another solution to that problem. We’ll be joining up with our friends, the Stephens, whose twin boys turn four the day before Titus. All of us are going to the zoo on Saturday and hopefully some other people will be able to join us! 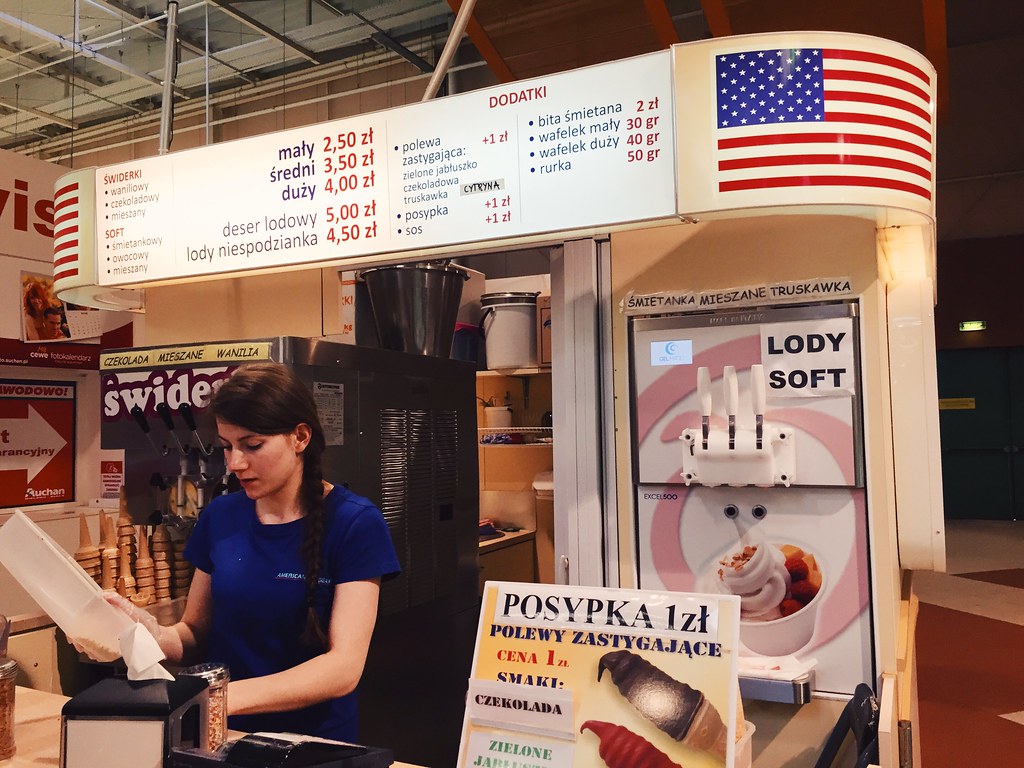 As we walked in to the Polish store late this afternoon all I could see were people holding ice cream cones. You would’ve thought they were handing them out for free by the sheer number of people eating ice cream. Then we saw the line! There were a ton of people waiting for ice cream at this little pop up style store just before you walk in to the store. I told Bethany we needed to see what all the excitement was about when we leave the store. We did just that and above you can see the photo I took of the place, complete with American flags. It was called “American Ice Dream” and I have no idea why it was named that. We were trying to figure out the Polish words for vanilla and “mixed” when the guy behind us said, “Do you need some help?” We were very thankful for him and we chatted for a few minutes in English which was nice. In the end we spent $2.68 (USD) to get all four of us ice cream! It was awesome and check out my “large” ice cream (below). 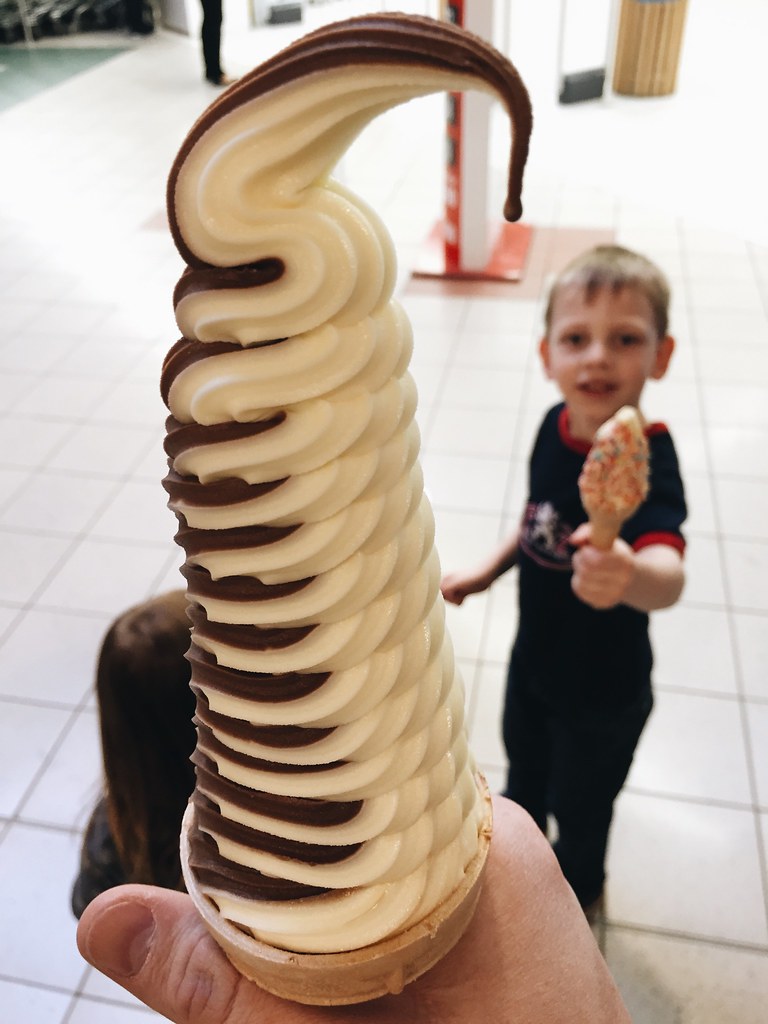 Since we didn’t want to eat in our car we settled down in a bench near a little kids play place in the mall and enjoyed them as a family. The kids wanted to play so we let them for a few minutes, but right next to was this little merry go round that Avery was excited about. I’m guees I’m a bit of a softy when it comes to Avery, so I ended up spending the fifty cents to let her and Titus ride around. She loved the fish she chose to ride and when they were finished we left for home. 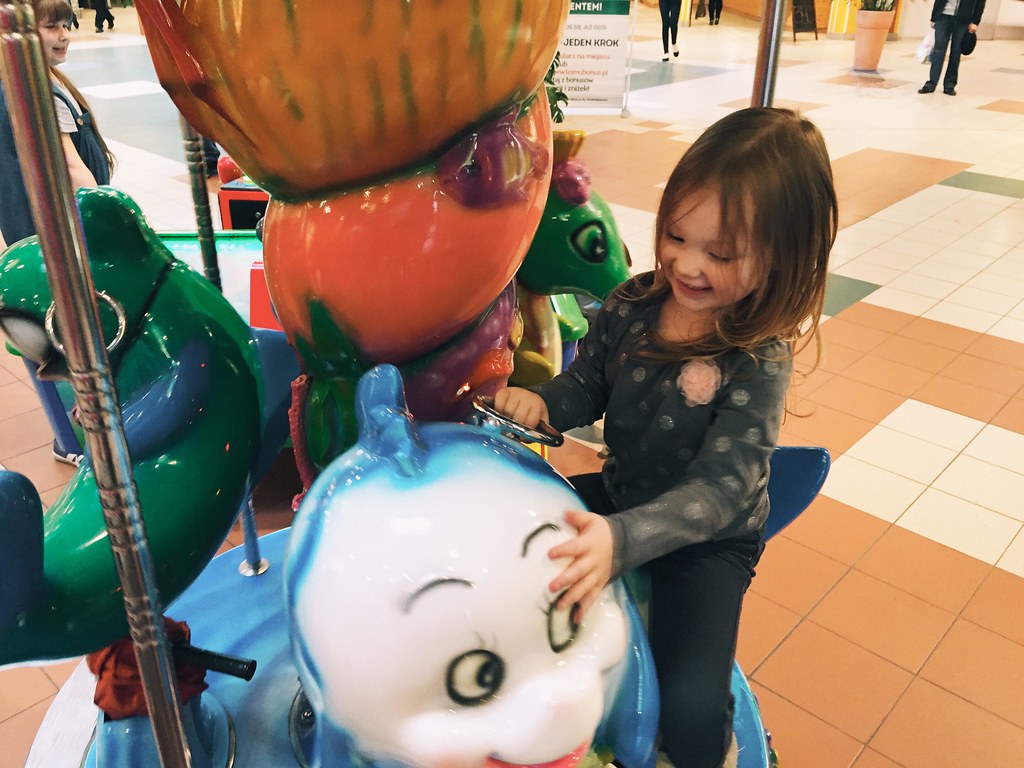 It’s gonna be a full week with one of our pastors from our sending church and his wife coming to visit, Titus’ birthday, a doctor appointment for Bethany, and final preparations for the upcoming Josiah Venture spring conference. I’m excited for whatever the Lord has in store for us this week and look forward to telling you all about it right here on the blog. It reminds me of the classic line from Pinky and the Brain. “So Brain, what do you want to do tonight?” “The same thing we do every night, Pinky. Try and take over the world!”