On our way to Poland yesterday, we stopped at a McDonald’s to grab lunch. The kids were asleep in the car, and attempting English in the drive thru is pretty much out of the question, so I went inside to order. The nice Polish woman who helped me spoke great English which was a blessing and as I went to pay I realized I didn’t have my debit card in my wallet. This was very strange because it’s pretty much my lifeline here, but I had to pay so I just used a different card. After getting back into the car I searched around and couldn’t find it. The last place I remember seeing it was the night before when I went to the grocery store for Bethany. Either I had left it there or put in my pants pocket that night. I guess this would have to wait until we get back from Poland.

Today I checked all my pants pockets and couldn’t find it so I went to Tesco where I remembered having it last. Since I can’t speak Czech, I used my phone (Google translate) to communicate with the ladies that I thought I had left my bank card there. Amazingly, and thankfully, they had it! I was told to go to “informace” (customer service) and showed them my passport and got it back! Praise God I didn’t lose it because getting a new sent here from the States would’ve been tough. And in the end I thought the whole experience was yet another language learning opportunity. 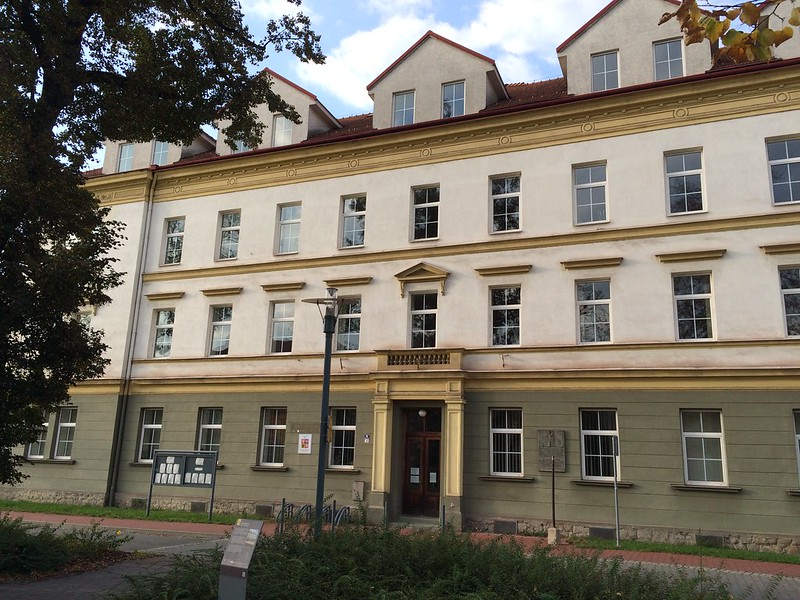 I took the kids out late this afternoon for a little walk to the park while Bethany started dinner. We live in a pretty historical area, so much so that they have little plaques along the square near our place explaining the different building and their significance. I’ve read a few of them, but today I found a new one over by the park that I hadn’t seen of the building in the above photo. Apparently it was built in the latter part of the 19th century and was an administration building then a secondary school. But in 1939 the Nazis occupied this area and (are you sitting down?) it became the headquarters for the Gestapo! A block from my apartment is where the Gestapo had their base of operations. Crazy! Wait… you don’t believe me? Here’s the plaque (written in Czech, Polish, and English): 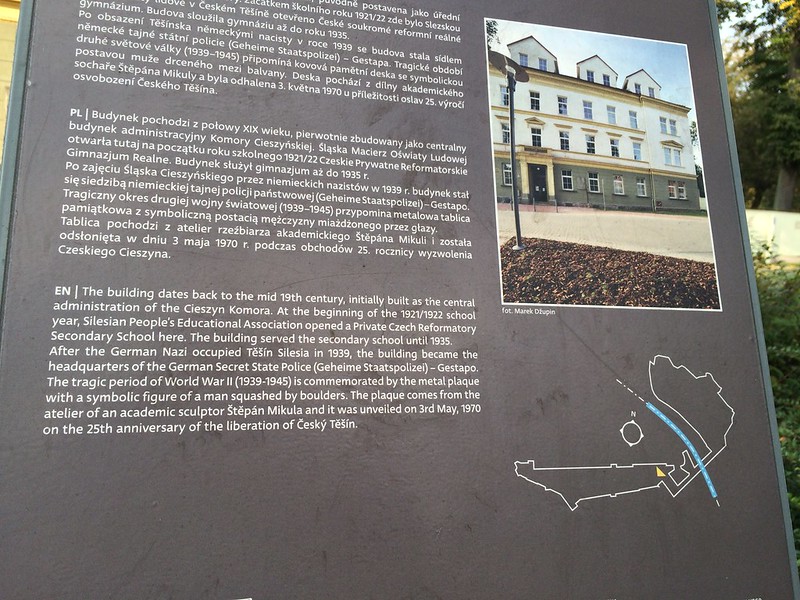 Tonight I attend a youth conference at our church where the main speaker was none other than Dave Patty, the president of Josiah Venture. He speaks very good Czech and I watched in awe as he preached from Romans 12:1-2 to a few hundred Czech teenagers. I did my best to listen for words that I knew, but genuinely had no clue what was going on. Had it not been for the person next to who spoke a little English, I wouldn’t even have known we were in Romans. From what I could tell though, Dave had the attention of the students and I’m sure they were blessed. I know I was encouraged, especially from the singing tonight when they did a familiar Phil Wickham song in English! Here’s a short clip of everyone singing “This is amazing grace:”

This is a room full of young people gathered for a Christian youth conference here in Czech. Such a joy to see this.

Hearing that song sung by so many young people almost had me in tears. The spiritual climate in Czech is so dry that to see all of these people praising Jesus in a small town in Czech is kind of mind blowing. This is fresh to me because just tonight a friend forwarded me a link on Twitter about just how atheistic the Czech Republic is. It’s yet another reminder of why we’re here but how God continues to move among the youth.

One reply on “Just Down the Street From the Gestapo”

Shay and Bethany – I pray that at some point this year long blog will be put in book form. It is such a blessing to read your news and hear your hearts. Thanks for the song as well.
Love you all,
Judy (and Steve)