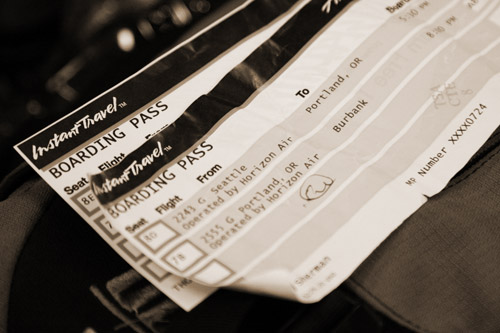 Some readers of my blog my recognize that title from a Seattle based indie band, but by no means does my story have to do with Death Cab For Cutie. The only connection is Seattle, which is where I was going when I started thinking about airplanes. No, I don’t mean the actual plane with the wings and pilot, what I really mean is the people who board them every day. Where else will you find so many different types of people than on an airplane? There’s the business man, the mom and baby, the college student, or the first time flyer. There’s the out-of-towners, the dad, and the famous guy in first class who you just can’t remember their name, but you know you’ve seen them before. There are these and many others, but on my trip this weekend, I realized there’s so much to watch and learn as you sit, with your belt fastened of course, and listen to those around you.

The thing is, I’m kind of a people watcher. I like to observe and listen to the people around me. Some might call it eavesdropping, but I don’t think that concept counts on an airplane. You can’t help but hear just about everything going on within three rows of where you’re seated, and whether you like it or not, you’re stuck there for the remainder of the flight. But my flight to Seattle this week wasn’t one of those painful times. I never felt stuck, but rather entertained. It wasn’t painful, it was enjoyable. Let me explain.

Bethany and I left last Friday afternoon for a small trip away with family. After making our way through the usual madness of check-in lines, airport security, and boarding process, we found our seats–21D and 21E. These seats would be our three feet of space for the next two and a half hours. Seated with us in 21F was a student named Mike. I recognized the school named on his shirt, plus the book he was reading, and I asked him if that’s where he attended? He replied with a simple “yes”, which prompted the man in 20E, just one row ahead to say, “you go there? I teach there!” It never ceases to amaze me how small our world is. Nevertheless, we listened as Mike and the man discuss their studies and if they had ever crossed paths. Yet, the teacher in 20E wasn’t flying solo. His wife and baby were with him, which provided more entertainment for us. The man’s daughter, who couldn’t be more than 18 months old, was a people watcher herself. She couldn’t keep her eyes off of us at least, which was a joy as we played “peek a boo” behind the seat and talked in high pitched voices to her. Most of the time having a baby near you can be a hassle, but this little one was well behaved and just enjoyed being with mommy and daddy. Our flight attendant Marc was just as happy as the baby in front of us. He was kind and smiled a lot, which I think made our flight that much more enjoyable. At one point he even held our little “peek a boo” friend to which the woman a few rows back said, “that’s a nice a man.” But those were just the people in front and back of us. Our neighbors to the left were having a different experience altogether. The larger gentleman in the middle found out his flying buddy in the seat next to him like cars. This threw him into a conversation that lasted the majority of the flight. I’m pretty positive he talked about eighty percent of the flight whether the man next to him wanted to talk or not. But who really cares about all these people you might ask? Why the heck are you talking about this Shay?

I guess the point is there’s just something about airplanes. You can see so many different people at one time, for an extended period. You can watch as they interact, as they work, as they discuss life, as they play with their kids, and as they go into their own worlds. They paid the same amount or more than you did to be on that plane. They are just trying to get to their destination to enjoy whatever it is that waits for them so many miles away. You can hear guys like say as he looks out the window, “I’ve never flown this low or close to downtown…” as we get ready to land in Seattle. You can watch people help each other with their luggage and make friends in a short amount of time. You can simply watch people. I don’t know why it sticks out in my mind so much. I guess when I’ve got two and half hours to sit and think these are things that come to mind.