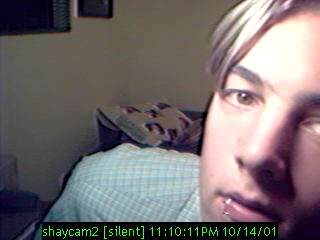 check out my lip ring…ok it’s fake, but I’m getting it done for my birthday

It’s kind of early in the morning. It’s 6:51AM by my little computer clock in the bottom right of my screen and I just thought I’d take a minute and relax. It’s been a crazy weekend and now I have to get up and get my crap to school, which by the way, I am finally back at (school that is).

I went and saw MxPx and Lit this weekend in concert. A bunch of us guys drove down. It was rockin’ your pants off. Only problem was is that we saw a bunch of stuff we didn’t need or want to see. Like the girls being hoisted up and making out with each other. Or the lady that busted out some heroin right in front of us then walked off all goofball. But the part that was the most painful and fun was when the two sides of the crowds started chucking stuff at each other and getting all pissed. That “stuff” I’m talking about included plastic bottles, glass bottles, shoes, dirt, bottles with dirt inside, paper cups with dirt inside and etc. I was nuts! and we were right in the middle. I got hit in the face, that was cool. Couple other guys in our group got hit too. One of my friends got a beer to the head. That wasn’t funny, but it was funny. <--haha. Anyway, I'll see you guys later. To school it is. Shay