Editor’s note: This post is the second installment of a three part series. If you haven’t read Part 1, please click here.

After all the fun we had at Lake Bled and the wedding at the castle, we were just as excited to head a little more south towards the coast of Slovenia which is on the Adriatic Sea. If you know you’re geography, then you know that the Adriatic is the water that runs on the east side along the boot of Italy. Again, we rented an apartment through Airbnb.com in a town called Portorož. It’s a city that is literally across the sea from Venice, Italy (see map below).

Living in landlocked Czech Republic, we have often just longed for some ocean water. Our plan was simple: live by water and just swim every day. We were only going to be there Monday afternoon through Thursday morning, so a simple plan made sense. If we got tired of that we had even considered a day trip to Venice just for the fun of it and to say we did it. The apartment we ended up renting was affordable for three nights and it was a five minute walk from the sea. What could go wrong?!

When you rent from Airbnb.com you speak directly with the apartment owner via text or their smartphone app to setup meeting times and to get the keys. In our case, the guy I was talking to online spoke English and said he had an apartment manager who would meet us to get the keys. The time was set and when we did arrive at 2:00pm on Monday I tried calling and texting but no answer. Instead of waiting around, we decided to just go to the grocery store just down the street to get a few things for dinner since we would be making our own meals, all the while still trying to contact the property manager to get the keys.

There were a bunch of apartments grouped together, but I didn’t know exactly which one was the one we were staying at. When we got back from the store I started walking around the buildings trying to figure out where it was. This went on for an hour. Then we drove around some more trying to keep the car AC going because it was hot outside and the property manager finally called. Surprisingly, He spoke no English. I tried anything I could use from the Czech language to help our discussion but he just kept saying, “Hallo!” (which I just assume is “Hello!”). After multiple attempts of him saying things and me saying things coupled with long, awkward pauses, we hung up and I looked at Bethany and with frustration said, “What are we going to do?” 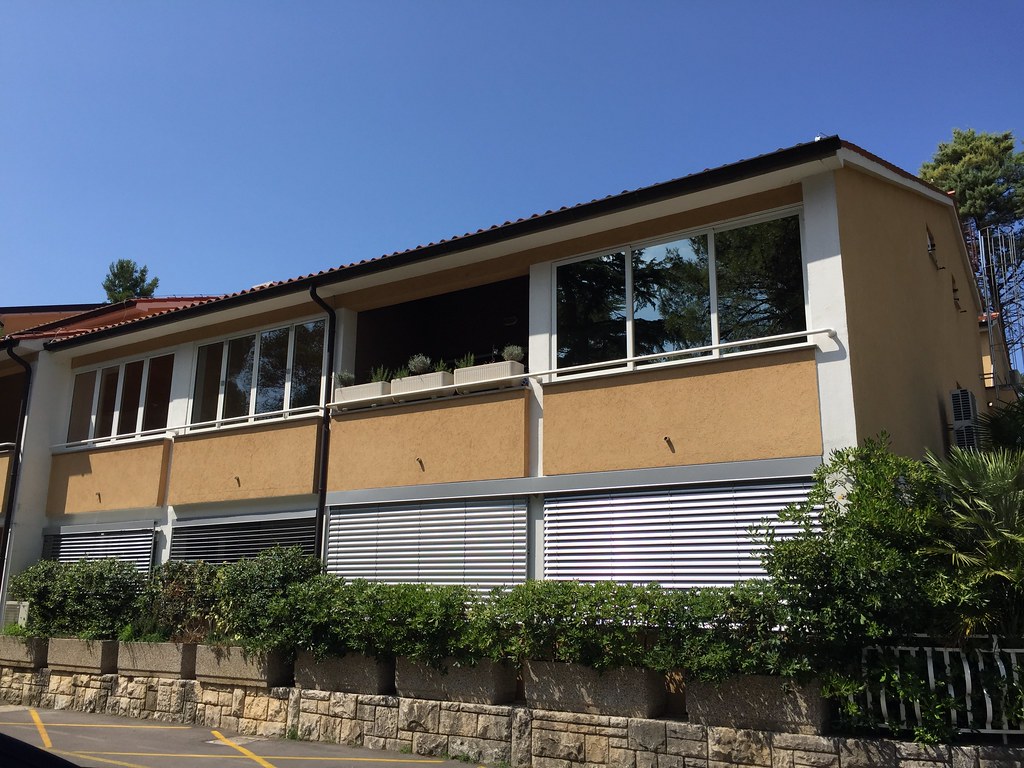 So I texted another missionary family in Slovenia to see if they could help. Thankfully, they called the guy for us and found out he doesn’t speak Slovene but some kind of “Croatian/Italian mix” (their description). Thankfully the missionary wife did speak enough of whatever he spoke and they said he would be there in three minutes with the keys. This all happened while I was walking around the complex trying to confirm which place we would be staying. The above photo is one I took of the outside of the building when I finally found the patio with the potted plants which was the only description I was working off of. When the guy did finally arrive he saw Bethany and the kids first and tried letting them in but had the wrong keys and had to go back to a pile of keys in his car to get ours. When we got inside the place was awesome. It had AC (a rare thing around here), good size rooms, and a nice kitchen–everything we needed for a restful time. The guy showed me around and told me a bunch of these I couldn’t understand at all and said goodbye.

After we got settled in the apartment, we decided to try to do a quick swim since it was our first day there and we had some time before dinner. We walked down to the shoreline only to find out that it’s not really a shore as much as it’s a concrete area and you either jump into the water or take the stairs, much like you would get into a pool. As well, and quite unfortunately, we realized that we were in Europe at a “beach” which apparently also means that clothing is optional. I just tried to keep my eyes on our kids in the water who loved the roped off swim area. We had about thirty minutes of fun before drying off and walking back towards our new, temporary home.

On our way back from the water, we saw a Mexican food place along the boardwalk called “Papa Chico’s.” It’s very hard for us pass up on Mexican food. I mean, we’re Californians–we love Mexican food! Not only are Mexican restaurants very rare here, they are usually not very good. In this case we figured it would be a winner because we were in a pretty touristy area so we decided to just eat right then instead of going home, changing, and coming back.

The food was mediocre. Both Bethany and I ordered enchiladas, but she got chicken and I got beef. We ordered plain, cheese quesadillas for the kids which weren’t that bad. I said during dinner, “I’m not exactly sure what I expected, but it wasn’t this” in regards to my plate. The beef was more like chili (I guess?) and it all just didn’t taste right. I did, however, enjoy the Coke Zero that I didn’t intend to order. In the end we were a little disappointed but we were fed and walked back to our apartment. That evening Bethany complained of a stomach ache. She asked me if I was feeling weird at all and I wasn’t. Normally we would probably stay up a little bit and watch TV or read after putting the kids to bed, but Bethany felt like she needed to sleep off whatever was ailing her stomach and we went to bed a little early.

At around 1:30am I was awoken by a loud crashing sound. I sat up in the strange room and tried to adjust my eyes to see anything at all. The two bedrooms are in the upstairs of the apartment and everything else is downstairs. The little AC unit was running loud and it’s located right in the stairwell so that was the only noise I was hearing now. I looked over and saw Bethany wasn’t in the bed and then proceeded to see if baby Karis was in her Pak-N-Play and she was. Upon standing up and walking to the bedroom door I called downstairs in one of those whisper yells, “Hello?! Is everything OK?” so as not to wake the kids who were asleep in their room. No answer back. I was pretty out of it so I sat back down on our bed and that’s when I heard Bethany faintly say, “Shay…help.” Oh no.

In her race to the only bathroom at the bottom of the dark and unfamiliar stairwell, Bethany slipped on the tile and crash landed in the bathroom doorway. When I found her she was on the ground and emptying her stomach. We figured it was either the same stomach thing Titus had on our drive down or food poisoning. I wasn’t much help because the whole event was making me feel sick so I laid down on the couch. In the end, Bethany spent until close to 4am repeating the downstairs rush (minus the fall), while I laid on the couch also starting not to feel well myself. I thought it was just the events that were making me sick, but that was not the case.

Bethany did get some sleep that night and I did too after going back to bed around 4:30am. When the kids woke us up at 8:00am Bethany asked me how I was feeling and I said, “Not good.” Something wasn’t right in my stomach and it would last this way until the afternoon when my body rejected what we ate the night before. I was sure it was food poisoning now. By God’s grace, the kids were happy to play with Legos that we brought with us for the majority of the day. I don’t remember personally helping them, but Bethany said at one point she made them some eggs while sitting in a chair because she couldn’t stand. Mostly, we just laid in bed that day, unable or not wanting to move.

That’s all for this episode. The last and final installment of our vacation will be posted tomorrow! 🙂

One reply on “Awesome to Awful: Our First European Vacation (Part 2)”